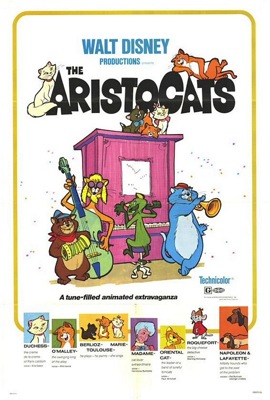 Paris, 1910. The fabulously wealthy retired opera singer Madame Adelaide Bonfamille has decided to leave her entire fortune to her high-society pet cats. Her butler, Edgar, wanting the fortune for himself, drugs the felines with sleeping pills and abandons them in the French countryside... the night after the will was made... which isn't the least bit suspicious.

Unlike cats in the real world, classy Duchess and her three kittens decide to make their way back home with the help of streetwise alley cat Thomas O'Malley. Along the way, he takes them to hang out with his alley cat friends, who treat the pets to some anachronistic jazz music (accompanied by even more anachronistic psychedelic graphics). No prizes for guessing the ending: Duchess hooks up with Thomas O'Malley, and Edgar gets what's coming to him courtesy of the alley cats.

Tropes used in The Aristocats include:

Duchess: If you want to turn me on/Play your horn/Don't spare the tone/And blow a little soul into the tune.

Waldo: *looking at a menu* Look! Look at this! "Prime Country Goose a la Provencale, stuffed with chestnuts"...? And "basted in white wine." *hiccups*
O'Malley: *looking disgusted* Basted? He's been marinated in it.
Waldo: Dreadful! Being British, I would've preferred sherry.

Napoleon: Let's see. They're Oxford shoes, size nine and a half. Hole in the left sole, it sounds like.
Lafayette: What color are they?
Napoleon: Why, they're bla-now how would I know that?

Duchess: Your name seems to cover all of Europe!