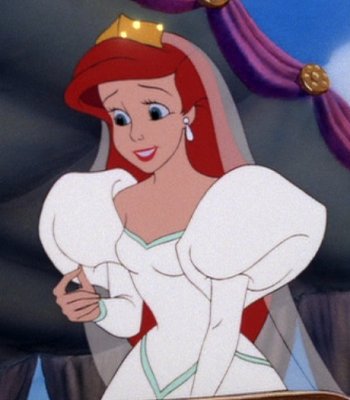 Ursula could fit in one of those.

These sleeves are almost as poofy as my hair.
—Momoko Wedding Peach Abridged

Sleeves with puffs on or just below the shoulders have been a part of women's clothing, and even men's, since at least the late 15th century, and could get fairly large, like the sleeves on this dress.

Yet during the late 19th century, came the "leg of mutton" sleeves, which were shoulder puffs injected with growth hormones. These balloons, most popular during The Gay Nineties and the 1900's, were just huge. Today, they are usually seen in wedding dresses, but do show up in other places. Armor over the shoulders has a similar shape.

The biggest way to tell if it's this trope is if the wearer's head could fit in one of those sleeves (not counting her hair).

Examples of Giant Poofy Sleeves include: