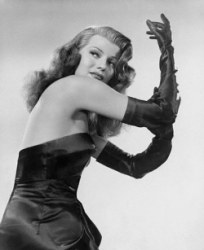 Opera Gloves [1] are long (elbow-length or longer, usually reaching to the upper arm or even the shoulder) gloves worn by women as an accessory, usually to a formal outfit such as an evening gown or wedding dress. The "elbow-length or longer" part is the key; gloves which cover a substantial portion of the forearm, up to just below the elbow, can legitimately be called "long gloves" or "evening gloves", but never "Opera Gloves".

Most popular during the Regency Era (roughly 1790 to 1814, so you'll see them in a lot of Jane Austen adaptations), the late Victorian Era, The Gay Nineties and The Edwardian Era (roughly 1870 to 1914), and the World War II years through the early Sixties. Mostly confined to "specialist" fashions since then (wedding gowns, debutante outfits and the like), though there was a minor revival in the 1980's.

Opera Gloves are usually associated with the following character types (not an exclusive list, but these are the types most frequently seen wearing long gloves:

As noted, Opera Gloves are closely associated with the aristocracy and royalty, especially during the 1870-1914 period, (in fact, gloves in general have been a symbol of royalty and authority for millennia) and many fictional queens, princesses and noblewomen will be portrayed as wearing them as part of their dresses (would be Gorgeous Period Dress, but those were worn in Real Life as well).

Commonly paired with a Pimped-Out Dress, Everything's Sparkly with Jewelry, Pretty in Mink (whether a fur wrap or fur coat), Parasol of Prettiness.

In the early 21st century, about 75% of wedding dresses on the market are sleeveless and strapless. Other brides prefer more modest styles with sleeves, higher necklines, and covered backs. Most of today's wedding dresses have either lace-up backs or zipper backs. Wedding dresses can also be long or short, depending on the type of wedding. Many Western ceremonial dresses are derived from Christian ritual costumes. So it was required to reduce skin exposure. In response to this trend, sleeveless or strapless dresses often wear long white gloves.

A debutante or deb (from French: débutante, "female beginner") is a young woman of aristocratic or upper-class family background who has reached maturity and, as a new adult, comes out into society at a formal "debut" or possibly debutante ball. Originally, the term meant that the woman was old enough to be married, and part of the purpose of her coming out was to display her to eligible bachelors and their families, with a view to marriage within a select circle. The court dress has traditionally been a white evening dress, but shades of ivory and pink were acceptable. The white dress featured short sleeves and white gloves, a veil attached to the hair with three white ostrich feathers, and a train, which the débutante would hold on her arm until she was ready to be presented. Débutantes would wear pearls but many would also wear jewellery that belonged to the family. Over the centuries, styles and fashion have changed. But, the one constant which ties the early debutante in England to the modern-day American debutante, is the wearing of white kidskin above-the-elbow(=opera) length long debutante gloves. The Debutante Glove has been recognized for over a century as one of the foremost symbols of upper-class femininity. A debutante without gloves is not a debutante at all.

Here is what you need to know when wearing this gloves for any occasion. Don't appear in public without your gloves with you. Don’t make a habit of carrying your gloves ~ they should be considered an integral part of your costume. Gloves should be kept on when shaking hands, dancing, or presenting your hand to be kissed, but not when dining. The basic rule for the length of all gloves is as follows: The shorter the sleeve, the longer the glove. Opera gloves are, therefore, properly worn with sleeveless or short-sleeved cocktails dresses or strapless, sleeveless, or short-sleeved evening gowns. White, ivory, beige, and taupe are the traditional colors for opera gloves and are appropriate for virtually any occasion of which opera gloves are worn. Black opera gloves should not be worn with white or light-colored gowns, only with dark-colored, or bright-colored clothing. Formal events require gloves that are at least past elbow length. Don't wear short gloves to a white tie affair. You can wear bracelets over gloves but not rings.

Examples of Opera Gloves include:

Retrieved from "https://allthetropes.org/w/index.php?title=Opera_Gloves&oldid=1895809"
Categories:
Cookies help us deliver our services. By using our services, you agree to our use of cookies.