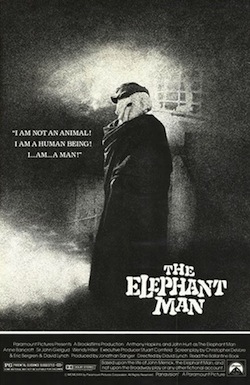 The Very Loosely Based on a True Story saga of Joseph Merrick, the Elephant Man.

Basically, one of the saddest films ever, and one of David Lynch's few non-"omgwhaththehellisthisaaaaaaaaaI'mscared" movies, depicting Joseph (here called John, and played by John Hurt) Merrick's struggle to leave an abusive circus sideshow, while meeting Dr. Frederick Treves (Anthony Hopkins), who takes him out of that place and gets him into the London Hospital, where he - being an educated and kind person but still with the outward appearance of a freak - becomes the focus of London's attention, raising the question: is Merrick just moving from one circus to another?

Tropes used in The Elephant Man include:
Retrieved from "https://allthetropes.org/w/index.php?title=The_Elephant_Man&oldid=1692480"
Categories: