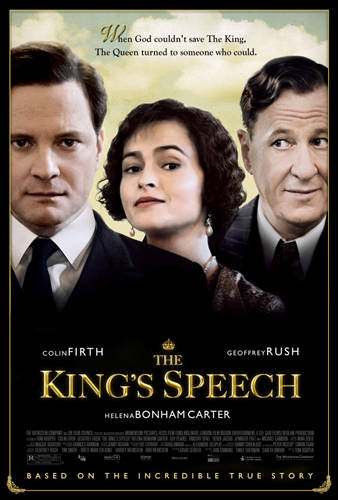 The King's Speech is a 2010 period film, directed by Tom Hooper and starring Colin Firth, Geoffrey Rush, and Helena Bonham Carter. The film depicts the early years of Prince Albert, Duke of York (later King George VI) and his struggle with a severe speech impediment that kept him from carrying out public speaking engagements. His wife Elizabeth, the Duchess of York, enlists the services of failed Australian actor-turned-speech therapist Lionel Logue to help her husband. Logue's unconventional methods do indeed begin to make some progress. Meanwhile, however, Prince Albert's older brother Edward VIII makes a royal botch of his own marriage plans, thrusting him even further into the spotlight, even as another famous public speaker is stirring up trouble on the continent.

The film earned strong positive reviews, particularly for lead actor Colin Firth. It was nominated for twelve Academy Awards (the most nominations for any film that year) and won four of them: Best Original Screenplay, Best Actor, Best Director, and -- most importantly -- Best Picture.

Tropes used in The King's Speech include:
Retrieved from "https://allthetropes.org/w/index.php?title=The_King%27s_Speech&oldid=1901742"
Categories:
Cookies help us deliver our services. By using our services, you agree to our use of cookies.