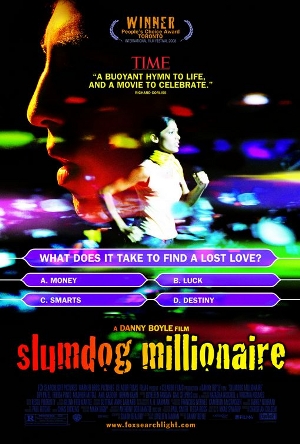 A 2008 film directed by Danny Boyle based on the novel Q and A by Vikas Swarup.

Jamal Malik is on the verge of winning 20 million rupees on the Indian version of Who Wants to Be a Millionaire?. There's just one problem: he's a "slumdog", working at a minimum wage job, and nobody can see how he knew any of the answers. As they go through each question, he shows how events in his childhood and life contributed to his knowing almost every single one.

Notable for being quite cynical, but starring an absolute idealist and having a mostly happy ending.

Please note that, apart from the dance number at the end, this is not a Bollywood movie. It's a Western movie made in Mumbai. It does, however, have several references to Indian culture and Bollywood movies--including songs that have been used in other movies, a credits sequence made to look like old-fashioned movie posters and a reference to legendary actor Amitabh Bachchan (not to mention using two well-known Bollywood actors in the film).

Even though critically acclaimed internationally, over the next few years the movie attained widespread Hatedom and Snark Bait status in India, with numerous Take Thats from other Indian movies; mostly because Danny Boyle managed to hit just about every single Bollywood cliche in it, while turning the "Violent Mumbai" stereotype Up to Eleven to create the film's dark and cynical atmosphere. It didn't help that the word "Slumdog" became a kind of euphemism for not just Indians but South Asians in general, (Community, anyone?) never mind the fact that it's an insult, even to people who live in slums.

Tropes used in Slumdog Millionaire include:
Retrieved from "https://allthetropes.org/w/index.php?title=Slumdog_Millionaire&oldid=1832996"
Categories:
Cookies help us deliver our services. By using our services, you agree to our use of cookies.