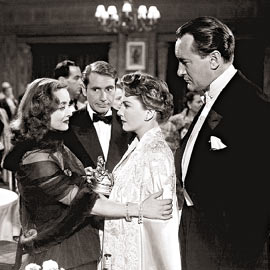 Featuring what is perhaps Bette Davis's most memorable performance, All About Eve is a 1950 Twentieth Century Fox film, written and directed by Joseph L. Mankiewicz, recounting the tale of Margo Channing, a seasoned veteran of the stage and the darling of Broadway, taking under her wing Eve Harrington, a young acolyte with nowhere else to go, whose motives are not what they seem. Other important characters include Addison DeWitt, a jaded, cynical, and frighteningly influential drama critic; Bill Samson, Margo's director boyfriend; Lloyd Richards, Margo's playwright; and Karen, Lloyd's wife and Margo's closest friend and confidant. The costumes were by famed Hollywood designer Edith Head and the film score was by Alfred Newman.

Tropes used in All About Eve include:
Retrieved from "https://allthetropes.org/w/index.php?title=All_About_Eve&oldid=1921987"
Categories:
Cookies help us deliver our services. By using our services, you agree to our use of cookies.