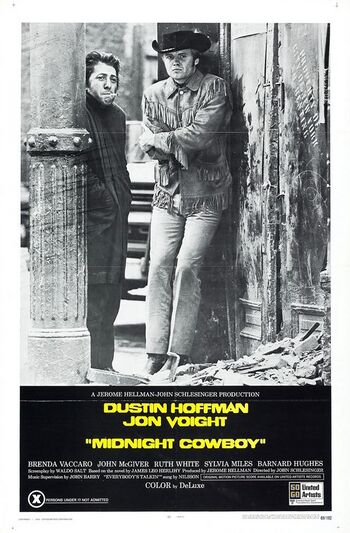 Midnight Cowboy is a 1965 novel by James Leo Herlihy, adapted into a 1969 film directed by John Schlesinger and starring Jon Voight and Dustin Hoffman. This article deals primarily with the movie.

Joe Buck is a dishwasher in a rural Texas diner. He's not very bright. One day, he decides to dress like a rodeo cowboy and move to New York, hoping to prostitute himself to wealthy women. He burns through his savings very quickly, unable to hustle, and is taken in by Enrico "Ratso" Rizzo, a small-time con man with a bad leg and pneumonia. They scrape by as best they can, hoping to escape to Florida one day...

The movie garnered quite a bit of controversy upon its release, being given an X rating by the MPAA (this was reduced to an R the following year). It is seen as one of the defining movies of the late '60s.

Tropes used in Midnight Cowboy include:
Retrieved from "https://allthetropes.org/w/index.php?title=Midnight_Cowboy&oldid=1830517"
Categories: