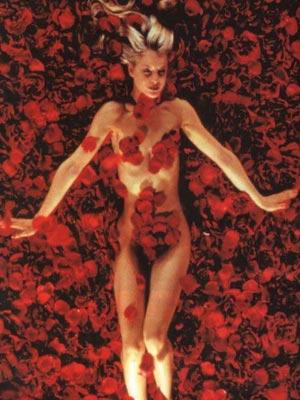 A dramedy that won the Best Picture Oscar for 2000. It was the break-out film for writer Alan Ball and director Sam Mendes, thus giving us, at a stroke: Six Feet Under, True Blood; Road to Perdition, Jarhead, Revolutionary Road and Away We Go. Chris Cooper also got his launch here, and there was great hype for a while about the younger actors, though unfortunately they haven't amounted to all that much since. Finally, Kevin Spacey won his second Oscar here.

Notable for being a dark, cynical, and dead-funny look at modern suburbia, possibly encouraging the recent trend of arty/angsty, relatively-obscure dramas getting all the Best Picture nods. It's also notable for juggling a ton of characters, successfully, where most films top out at three or four.

As to the plot, the opening narration tells it all:

The characters in the film:

Almost none of these characters are who they appear to be. The Burnhams evolve, while others are simply turned around on a single Wham! Line.

As the film progresses, Lester quits his job (but not before blackmailing his boss into giving him a pension), takes up a new one at a fast food joint, and trades in his sensible Toyota for a vintage Firebird he always wanted as a boy.

Tropes used in American Beauty include:
Retrieved from "https://allthetropes.org/w/index.php?title=American_Beauty&oldid=1562508"
Categories: