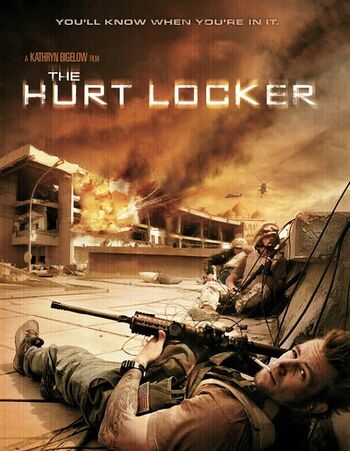 The film is done in the same vein as Generation Kill and has a minor amount of Jittercam for flavor. It does not address the ever-controversial politics of the war, instead focusing on the day-to-day lives of the characters. Critically acclaimed to the point of apoplexy, it still suffered theatrically due the trend of audiences steering clear of war movies during wartime. The Hurt Locker outperformed nearly the entire War On Terror film genre, notably drawing in a larger audience than other acclaimed films such as such as Stop-Loss and The Valley of Elah. Veterans who have seen the movie tend to complain about the liberties taken with EOD policy, but tend to agree that it captures the emotional and psychological effect of War in general (and the Iraq War in particular) like no other film.

It holds the dubious distinction of being the least-attended best picture Oscar winner on record.

The Hurt Locker was named to the National Film Registry in 2020.

Tropes used in The Hurt Locker include:
Retrieved from "https://allthetropes.org/w/index.php?title=The_Hurt_Locker&oldid=1853328"
Categories:
Cookies help us deliver our services. By using our services, you agree to our use of cookies.