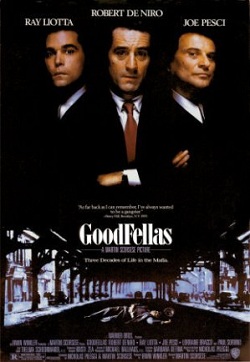 Martin Scorsese's famous 1990 film, based on the book Wiseguy by Nicholas Pileggi, which followed the story of New York City gangster Henry Hill (Ray Liotta) from his induction into the Lucchese crime family in the 1950s to his downfall and entry into the Witness Protection Program in the 1980s. Along with Henry, the film follows Henry's boss Jimmy Conway (Robert De Niro), his best friend Tommy DeVito (Joe Pesci), and his wife Karen (Lorraine Bracco). The film details Henry's moving up the ranks, his eventual imprisonment, his role in (at the time) the largest heist in American history, and his involvement with the cocaine trade (which eventually gets him arrested by narcotics officers and shunned by the Mob). As the ground crumbles around him, he turns to the Feds for protection, eventually having to "live the rest of [his] life like a shnook".

The movie became famous for several reasons, including a long tracking shot through the kitchen of the Copacabana; the montage near the end showing Henry's increasing drug-induced paranoia as he tries to run some guns, get a drug shipment off to Pittsburgh, and make dinner for his family; and Tommy's profanity-laden dialogue and Hair-Trigger Temper, which threatened to make Joe Pesci typecast for some time -- and won him the Best Supporting Actor Oscar. The movie itself ended up losing Best Picture to Dances with Wolves. The movie was selected for the National Film Registry in 2000.

Goodfellas was followed by Casino, based on the book of the same name (also by Nicholas Pileggi), which also featured De Niro (who 'fagocitated' Liotta's role in becoming the center of the movie's romantic subplot) and Pesci (still the same sort of vicious, cynical character- though, it should be noted, both guys he played really existed, and he played them pretty faithfully).

Tropes used in Goodfellas include:
Retrieved from "https://allthetropes.org/w/index.php?title=Goodfellas&oldid=1613230"
Categories:
Cookies help us deliver our services. By using our services, you agree to our use of cookies.