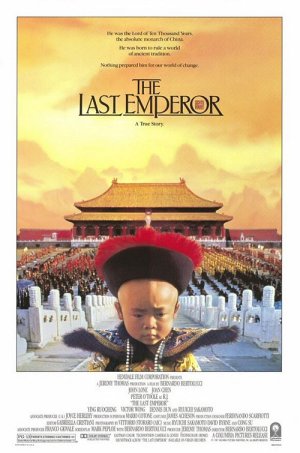 A 1987 film directed and co-written by Bernardo Bertolucci, The Last Emperor is the biopic of Pu-yi, The Last Emperor of China. Its story, based on his autobiography, tells how Pu-yi ascended to the throne at the age of three. In his brief reign, he was confined to the Forbidden City, not knowing of the world of his people. When he is forced to abdicate at nine, the rest of Pu-yi's life is one of desolation and impoverishment. After serving as the ruler of a Japanese puppet government of China during World War II, he becomes a political prisoner of the Soviets and then of the Communist Chinese. When finally released in the 1960's, Pu-yi dies in obscurity...

This proved very successful at the Oscars, winning all nine of its nominations, including Best Picture, tying the record set by Gigi nearly thirty years earlier.

The Last Emperor is the Trope Namer for:
Tropes used in The Last Emperor include:
Retrieved from "https://allthetropes.org/w/index.php?title=The_Last_Emperor&oldid=1833549"
Categories:
Cookies help us deliver our services. By using our services, you agree to our use of cookies.