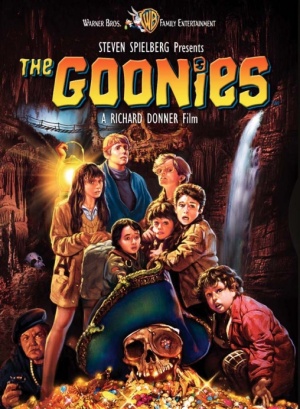 The Goonies is one of those ubiquitous films of The Eighties fans hold fond memories of, even today.

A small group of kids living on the "Goon Docks" of Astoria, Oregon are in dire straits as a local country club threatens their families' homes with foreclosure. On one of their last days in the neighborhood, one of the "goonies", Mikey, discovers a Treasure Map in his attic. The map allegedly reveals where to find the treasure of infamous pirate One-Eyed Willie -- and it appears to lead underneath Astoria. The Goonies, faced with possible homelessness, decide to save their neighborhood by going after the treasure -- but to get it, they must outwit a trio of mobsters and survive numerous death traps designed to keep One-Eyed Willie's treasure safe from outsiders.

The Goonies was the brainchild of three well-known directors: Steven Spielberg (producer/story), Chris Columbus (screenplay -- though, at the time of this film, he wasn't quite famous yet), and Richard Donner (director).

The movie was named to the National Film Registry in 2017.

This film also had two successful video games based on it.

Not to be confused with The Goodies.

Tropes used in The Goonies include:

Jake: You know I'm beginning to like this kid mom

Mikey: Come on One-Eyed Willy, what does this have to do with the map? Is this just another one of your tricks?
Mikey: We've got you now One-Eyed Willy, we're coming up right behind you!
Mikey: I made it, I beat you
Mama Fratelli: Thank you Mr Willy, thank you. You've made my day.

Mouth: You call that water?
Mama Fratelli: It's wet, ain't it? Drink it!

Rosalita: [in Spanish; subtitled] My God, I'm in a crazy house!

Mikey: How long have you guys been standing there?
Brand: Long enough, Mikey. Long enough.

Mama Fratelli: How long you boys been at that window?
Mouth: Long enough to see you need about 400 Roach Motels in this place.

Mrs. Walsh: You are so fluent in Spanish. That was so nice of you.
Mouth: "Nice" is my middle name, Mrs. Walsh.

Mikey: Chester Copperpot! Don't you guys see? Don't you realize? He was a pro and he never made it this far! Look how far we've come. We've got a chance!

Mouth and Mikey: Slick Shoes? Are you crazy?!

Jake: You always take his side, Mama. You always liked him better than me.
Mama Fratelli: (Smacks Jake) That's right!