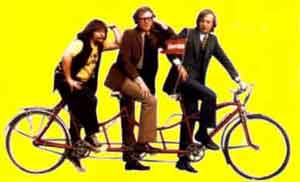 We do anything, anywhere, anytime.

A groundbreaking 1970 British comedy series, not nearly as well-known outside of the UK as its contemporary, Monty Python's Flying Circus. (Some view it as The Monkees to the Pythons' Beatles -- while others view it as the Beatles to the Pythons' Rolling Stones.) Born from the same generation of comic talents that infused British TV in the 1960s and 1970s with such innovative work, The Goodies was far more plot-oriented than Python (it was nominally a Sitcom when it premiered), but at the same time it was also far more anarchic and surreal.

The Goodies starred Tim Brooke-Taylor, Graeme Garden and Bill Oddie as three flatmates who run an agency that promises it can do "anything, anywhere, at any time". The BBC's own historical reference for the show describes it as a "live action version of a typical Warner Brothers cartoon", which is quite accurate, although sidestepping completely much of the thinly veiled social satire the show was inclined towards. Entire episodes were devoted to poking fun at topical subjects as diverse as TV censorship Nazis like Mary Whitehouse, nuclear testing, police brutality, Saturday Night Fever and the general crappiness of the British Post. Central to the show were the exaggerated versions of themselves that the leads played -- conservative royalist Tim, twisted gadgeteer Graeme, and Earth-child proto-hobbit Bill. The intersection of these three personalities generated as much comedy as the increasingly-bizarre situations that they found themselves in. Their trademark was the "Trandem" -- a bicycle-built-for-three which they invariably mounted and fell off of once per episode before riding to their next adventure.

More inclined to vaudeville-like humour than the Pythons, the Goodies never quite got the respect they deserved -- despite the fact that they lasted at least three times as long on the air. The series can be found -- albeit rarely -- on public television in the United States, as well as on YouTube; and some of their recordings (such as "The Funky Gibbon") can occasionally be heard on the Dr. Demento show.

Perceptive viewers will know Tim Brooke-Taylor from the 1971 film Willy Wonka and the Chocolate Factory, where he played the computer operator trying to get the location of the golden tickets from a computer that refuses to tell him.

Notable for having someone die laughing whilst watching it.

Not to be confused with The Goonies.

Tropes used in The Goodies include:

(Note that the latter is the remark that comes closest to pushing Bill over the edge...)

Retrieved from "https://allthetropes.org/w/index.php?title=The_Goodies&oldid=1618287"
Categories:
Cookies help us deliver our services. By using our services, you agree to our use of cookies.