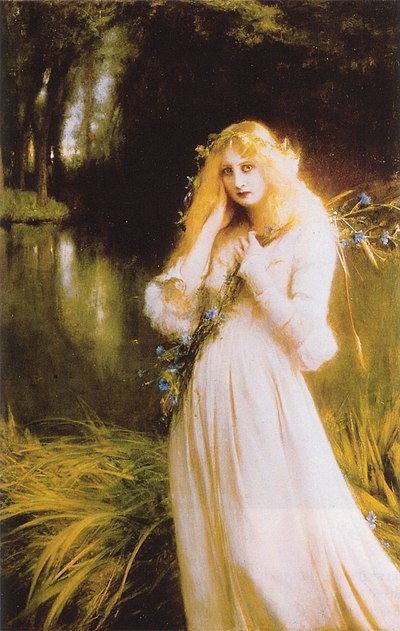 In Real Life, of course, mental illness is rarely pretty. But in fiction, there's just something about a lovely young woman, often with long, disheveled hair, running around babbling lyrically about the strange visions flashing through her deranged mind, singing creepy little rhymes, scattering flowers and occasionally bashing people's heads in.

Maybe this particular cutie was just broken particularly hard, maybe it was an illness or maybe she was born that way, but the result is the same, a tragically beautiful, ethereal waif who's mad as a box of frogs. Her beauty is an important point here, underlining her fragility and the sadness of her fate. She usually talks in riddles and rhymes, can be sad or joyfully happy (or switch between these states). Her mind may be so far gone that she's likely to murder people, but she'll always have clear skin while doing it. Sometimes, too, she has important knowledge the sane may lack, in which case she'll often have terrible trouble getting anyone to listen (a classical example of Mad Oracle). The original Cassandra from The Iliad was often depicted as a bit of an Ophelia.

There's often a surprisingly artistic bent to The Ophelia's madness, she may sing, dance wildly, or try to paint her delusions. She is often tied to nature (including walking around barefoot, wearing flowers, etc.), particularly water, probably as a nod to the original Ophelia (in Shakespeare's Hamlet) who winds flowers in her hair before drowning herself. That last bit can overlap with Instant Oracle, Just Add Water if she's also a Waif Prophet and/or a Mad Oracle.

The Victorians fell crazy (so to speak) in love with this trope and Ophelias in the form of wronged maidens and deranged brides go pirouetting and flower-strewing through art, poetry and literature of the period while the "mad scene" for the soprano heroine became a staple of opera. Insanity was linked to female sexuality and desire for independence. (Not coincidentally, the vibrator was invented in this same period as a treatment for hysteria in women.) In fact, psychiatrists at that time used to encourage female patients in madhouses—especially if they were youthful and pretty—to dress the part and carry sheaves of flowers.

If a male character is shown the same way, odds are good he's very feminine and delicate-looking anyway.

Examples of The Ophelia include:

Retrieved from "https://allthetropes.org/w/index.php?title=The_Ophelia&oldid=1841956"
Categories:
Cookies help us deliver our services. By using our services, you agree to our use of cookies.