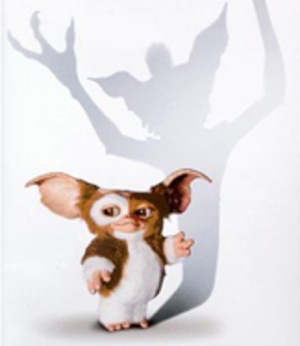 For the trope, see Griping About Gremlins.

Gremlins is a 1984 dark comedy/horror film directed by Joe Dante, and executive produced by Steven Spielberg. The film kicks off with an inventor Randall Peltzer stopping by Chinatown in New York City to pick up a gift for his son Billy. He ends up getting a mysterious, yet undeniably adorable critter called a Mogwai. The creature comes with instructions though, namely:

The little critter, named Gizmo, is gentle and well behaved, but after he accidentally gets splashed with water, more Mogwai suddenly are formed, and this new, mean-spirited batch tricks Billy into feeding them after midnight. They all form cocoons, and then turn into ugly, frightening Gremlins, who cause havoc and terrorize the town.

Followed by 1990 sequel Gremlins 2: The New Batch. This one relocates the main characters to New York City, and features a parody of moguls such as Donald Trump and Ted Turner, as well as references to films like The Wizard of Oz and the Rambo series.

This film and its sequel provide examples of:

Retrieved from "https://allthetropes.org/w/index.php?title=Gremlins&oldid=1958701"
Categories:
Cookies help us deliver our services. By using our services, you agree to our use of cookies.