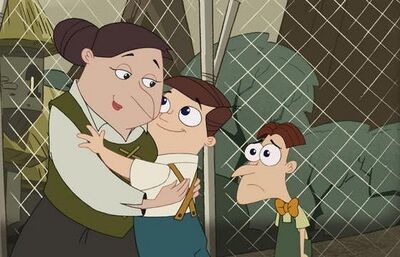 And the father prefers his dog, Only Son.

The nasty end of Parental Favoritism. Where there's an Alpha wolf, there's got to be an Omega. When there is a first banana, there is a second banana. This is the person in the family who can't get a break. For example, this is the child who's the big let-down to their parents, the daughter that was supposed to be a son (or vice-versa), the child the parents had by accident when they'd already decided they didn't need another mouth to feed. But all in all, this is basically the kid who is always getting the short-end of the stick.

A regular line that may be entailed with this is a variant of, "Honestly, (insert name), why can't ya be more like (insert favourite's name)?"

Frequently, being The Un-Favourite is a Freudian Excuse for a character who's a particularly pathetic loser. If the Parental Favoritism was garden variety (or even a product of his/her imagination), PG-rated Wangst, this is probably being played for comedy, a weak excuse for being a failure. If the favoritism was particularly vicious, however, up to and including abuse, The Unfavourite becomes a more tragic character—most probably The Woobie. Sometimes, however, the Unfavourite is almost suspiciously well-adjusted.

A variant is where The Un-Favourite is actually highly successful and dutiful, but can never get the approval of his parents, simply because their sibling will always do "better" in their parents' eyes. ("Hey look, dad, I won the Nobel Prize for Physics!" "That's nothin' -- your brother won Employee of the Month at Shop 'n Go last April!"). The Un-favorite doesn't need to play second fiddle to an actual sibling, and can even be an only child. Un-favorites without a sibling are often unwanted or unexpected children and can even, in perhaps an extreme case, be passed over for the family pet.

The audience's attitude towards the un-favourite is often based on what age the character is. There's a common perception that an adult character should really have gotten over this by now and moved on, even if the viewers/readers empathize with them. A child character, on the other hand, is likely to get the audience's unreserved support.

Age notwithstanding, this is usually a character you sympathize with, because we're supposed to root for the disadvantaged; expect the favorite either to be rubbing their status in their sibling's face, be an Aloof Big Brother, or completely unaware of the situation. It is, however, completely possible that the character is interpreting some behavior as favoritism—and the other character also regards himself as The Unfavorite. (Cue Sibling Rivalry.) Also, another possible situation is that the favourite is indeed aware of the situation, sympathize with the unfavourite and may even start the "talk with the parents" scene.

And Heaven help the poor kid if the favorite child is dead. (Possibly having received the status of "favorite" by dying.) See also You Should Have Died Instead.

Can easily escalate into Cain and Abel. May be rooted in a Death by Childbirth. May cross over with "Well Done, Son" Guy if The Unfavorite wants some recognition. If the favorite of the parents isn't even a member of their family, it's a case of Why Are You Not My Son?.

Examples of The Unfavourite include:

Retrieved from "https://allthetropes.org/w/index.php?title=The_Unfavourite&oldid=1859133"
Categories:
Cookies help us deliver our services. By using our services, you agree to our use of cookies.