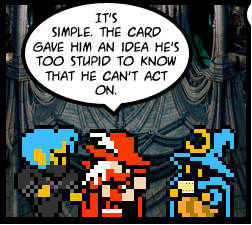 The card said: "Make your swords as things unto chainsaws." No, it's not possible. He did it anyway.

In a world bound by laws of physics, some things are just impossible. Even when there's magic allowing wizards to do things, there are often limits.

Despite this, somehow there's someone who can do things thought impossible, simply because they do not realize that they should be incapable of the achievement. Any of the characters might occasionally be And You Thought It Was a Game, but it can be a recurring trait for a Genius Ditz or a Bungling Inventor. This trope focuses on the times the character in question achieved what he or she did largely because they had absolutely no idea that it was supposed to be impossible.

In contrast to many cartoons, which consistently (and inconsistently) apply and dismiss physics for the Rule of Funny, this trope is typically meant to occur when the act in question goes against whatever physics are firmly established within The Verse. Generally the best way to tell the difference is whether or not the Achievement in Ignorance can be Lampshaded or not.

This can be played either seriously or for laughs. If for comedy, it is often The Ditz who does the undoable deed. If for drama, the character in question may be a genius or prodigy in his particular field.

It does happen in Real Life, usually with things like math or physics equations, occasionally with feats of daring that the accidental daredevil hasn't been told are life-threatening. On the more mundane side of things are people learning or successfully trying things their more learned peers were taught couldn't be done.

Compare Magic Feather, which gives people confidence to do things they only think are impossible for themselves. See also Magic A Is Magic A, which the perpetrators of this trope tend to violate. May lead to a How Unscientific moment. Compare Beyond the Impossible for impossible events or people trying to break the rules.

Related to Clap Your Hands If You Believe, in which this can quite literally be the case. Related to How Did You Know? I Didn't. when the situation is not limited to physics, just a highly improbable lucky guess. Also see Too Dumb to Fool, which can sometimes be the source of this. Occasionally a Snipe Hunt may end this way.

Contrast Power Born of Madness, in which the person does impossible deeds because he no longer cares if they're impossible. Also contrast the Determinator, who tends to do this kind of thing intentionally. Compare Too Dumb to Fool, where a fool immediately sees through a lie or other treachery, and Centipede's Dilemma, where being aware of what you're doing makes it harder to do.

Examples of Achievements in Ignorance include: