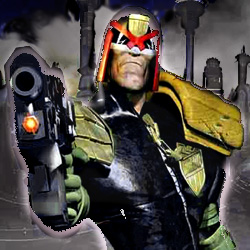 
Walker: "I like that part of the job."
—Danny Phantom

Proper legal procedure can be such a drag sometimes, can't it? You have to arrest the perp, go through the expense of a trial... plus it means you have to get lawyers involved.

Perhaps this is why so many societies, particularly those with dystopian or evil leanings, go for the alternative: empowering a group of official agents with near-limitless authority to detain, sentence and punish offenders.

Depending on the morality of their government, these organizations may be anything from noble Jedi-like protectors who pursue only serious threats to society, to the sort of Terror Squads that make the Gestapo look like paragons of justice and who get called out to use deadly force on jaywalkers.

When a private citizen acts as Judge, Jury, and Executioner without official sanction, he's a Vigilante Man.

Not to be confused with Judge Judy and Executioner.

Examples of Judge, Jury, and Executioner include:

Justice is swift in the Court of Miracles!
I am the lawyers and judge all in one!
We like to get the trial over with quickly,
Because it's the sentence that's really the fun!

The book of law is the Bible to him
Any crime committed is a sin
He keeps the peace whith his law-giver
Judge, jury, and executioner

He is judge, jury, and executioner because he killed them all

Has the legendary hero stooped to thievery? How deplorable. As king of the Snow Plains, I do hereby judge your crime.
(cue One-Winged Angel)
I, Glacier Le Cactank, of Weil's Numbers, have reached a verdict. The punishment for thievery is death!