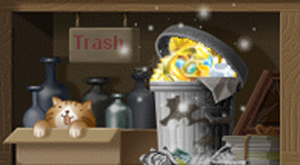 One man's treasure is another's trash.

Quark: Someone's extracted all the latinum! There's nothing here but worthless gold!
Odo: And it's all yours.
Quark: NOOOOOOOOOOOOOOO!

The characters of a story run across something very valuable. But, due to ignorance, stupidity or possibly not being from Earth, they discard it as worthless junk. The audience groans in disbelief as wealth beyond their dreams is left lying on the floor.

Finding gold is the most common example of this trope. Though it has industrial applications as a highly corrosion-resistant electrical conductor and potential as a cheaper alternative to platinum catalysts, almost all of gold's value is due to its rarity. And, in a disaster situation, gold would quickly prove to be worthless after all. This can lead to an ironic Death by Materialism situation for someone who's "smart" enough to figure out what those funny yellow rocks really are and won't abandon them when they really should be running for the door. Compare All That Glitters.

A common Karmic Twist Ending is for Earthly characters to encounter a world or dimension where something like gold is so plentiful that it has little value, or where something common on earth, like aluminium or copper, takes the place of gold or platinum as the ultimate precious metal. (Aluminium actually was more valuable than gold once; see the Real Life section below.) Of course, given what science knows about the formation of elements, it is highly unlikely that there are any solid-gold planets out there, no matter how amazing it would be. On the other hand, there is a giant space-diamond. Probably a whole lot of them.

There is Truth in Television for the reasoning behind this trope. There is a law of economics where materials decrease in value as they become more abundant. (Refer to the above paragraph.)

Also common is the devaluation of diamonds Twenty Minutes Into the Future after the invention of successful synthesis technology. Diamonds are not made of an intrinsically valuable or rare element, but common carbon, so advanced people from the future or space-faring aliens are likely to consider them somewhat common and utilitarian. For that matter, they aren't that rare now (about as common as rubies, which have a much lower market price); their perceived value is mostly market manipulation sucker-rearing by DeBeers the distribution companies.

Using this with petroleum may constitute a Did Not Do the Research, if a writer assumes its only conceivable function is to fuel modern machines, ignoring its previous uses for waterproofing, oil lamps, etc. and other modern uses like chemical synthesis, including most polymers.

May be part of a Green Aesop on how foolishly humanity rushes for unnecessary luxuries and how money cannot be eaten.

Not to be confused with Green Rocks.[1] See also All That Glitters and Commonplace Rare. Kids Prefer Boxes is the G-rated version. Sometimes the species in question has a reason to not care about the shiny yellow rocks... A counterpart is Only Electric Sheep Are Cheap; both can exist in the same work. When video game money is useless because there's nothing to buy with it, that's Money for Nothing.

Contrast Gold Fever (where people go nuts over amounts of gold or some other valuable), Gold Makes Everything Shiny, Mundane Object Amazement, and Grail in the Garbage.

Not to be confused with pyrite, also known as "fool's gold".

Examples of Worthless Yellow Rocks include:

What am I going to do with all this gold‽

Dilbert: Isn't it odd? Despite how advanced we are, we still rely on rocks for currency.
Dogbert: What's even dumber is that it's a rock that's hard to find.

Kickback: Sheets of pressed inert plant matter with pictures of humans on them? (Read: banknotes)
Bombshell: What could these be worth to anyone?

1 Kings 10:21 : All King Solomon’s goblets were gold, and all the household articles in the Palace of the Forest of Lebanon were pure gold. Nothing was made of silver, because silver was considered of little value in Solomon's days.

Why do they always want gold? What do they do with it? Do they eat it?

Vinnie: Will you trade me the key for this diamond?
Snake: What are you, stupid? Diamonds are worthless! Why do you think it's in the trash?

"ORBS? What good are dumb old orbs? If I saw one, I'd probably just pass by."

Everyone in the game still prefers to deal with caps instead of other currency - only casino cashiers are willing to pay you in NCR dollars or Legion coins.
That said, every currency can be traded for caps or vice versa at their respective exchange rate from anyone willing to barter with you, regardless of your barter skill.
The NCR starts to print paper money backed by gold. Unfortunately, before the game starts the NCR gold reserves are irradiated by the Brotherhood of Steel, so they have to switch back to backing their currency on water. This massively reduces the value of the NCR dollar.
The Legion mints its own money system of gold and silver coins which end up having a higher value than NCR currency or bottlecaps, owing to actually being made from said metals.
Someone in the game gives you a quest to destroy a bottlecap press located in a pre-war soda factory, noting that a supply of newly pressed "counterfeit" caps will destablize the economy. (Unfortunately, you aren't given a chance to use the press before destroying it.)
In the Dead Money expansion, you can come across gold ingots - these weigh 35 pounds and are valued at 10,349 caps. This means that many items (like fully-repaired rifles and energy weapons) are worth more than their weight in gold.

Thief: Wealth that belongs to those who can make it? Great Elf in the sky... We must stop this horrible future no matter the cost! So long as cost remains on the backs of the poor.

Zoidberg: (after sampling some jewellery) I ask for rich guy stuff and you give me shiny pebbles? Bah! I bid you adieu!

John: (after taking a shot of whiskey from the statue) Ah, that'll make your bull run.

Burgler: Rats! The case around it is made of pure diamond! How ironic.

Disclaimer: "Not all collector's plates increase in value - some go down."