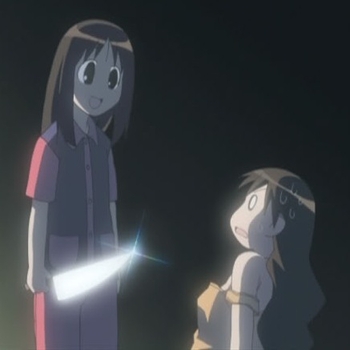 A character, often a Cloudcuckoolander, whose innocent attempt to make something (typically a drawing) comes across as Nightmare Fuel—to the other characters. Unlike with normal Nightmare Fuel, other characters in the show will notice how horrifying the drawing/poem/song/story is, but the innocent NFSA sees nothing wrong with their tale of baby eating zombies or the drawing of a "miniature poodle" that looks more like the ungodly offspring of a hellhound and a CHUD.

More generally, this kind of character will be simply a casual observer to some frightening or grotesque phenomenon who either doesn't bat an eye or responds with some kind of snarky comment (and no, they're never meant to be a Stepford Snarker). It will often be a child or a "simple" person who doesn't comprehend the danger, or else a Jerkass or Misanthrope Supreme who genuinely doesn't give a damn what happens. Either way, you can expect that saner characters will be almost as creeped out by this character's reaction as by the actual threat.

Frequent features of the works of a Nightmare Fuel Station Attendant are:

Frequently combined with Room Full of Crazy, Creepy Child or Dissonant Serenity tropes when the writers need to give their characters that extra little bit of creepy.

Compare Nightmare Fetishist, Nightmare Fuel Coloring Book. The very existence of (unintentional examples of) the Uncanny Valley proves this is trope is Truth in Television.