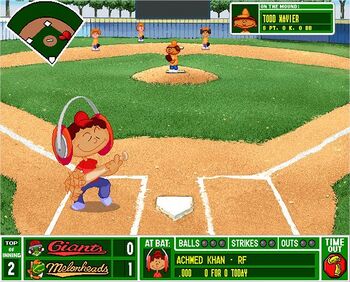 Just for the Rule of Fun.

Backyard Sports, formerly called Junior Sports, is a sports video game series originally made by Humongous Entertainment, which was later bought by Atari. It is the only game series that has licensing from all the major professional sports leagues in the USA: the MLB, MLS, NFL, NBA, and NHL.

The series was originally only Competitive Multiplayer, but starting with Backyard Football '10, Co-Op Multiplayer is also in the games.

Tropes used in Backyard Sports include:

Certain installments of the series provide examples of: