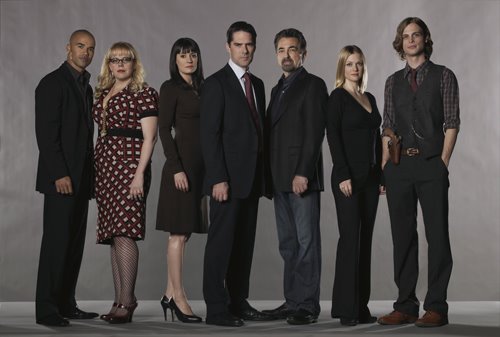 The BAU team, from season 3 to season 6, and now again.

These days, every Police Procedural needs a clever gimmick. Something that separates it from the pack. For Cold Case, it's the pursuit of old, unsolved cases. For Law and Order SVU, it's sex crimes. For CSI, it's solving crimes with magic. For Bones, it's…well, bones. (And magic.)

And for Criminal Minds, it's crazy serial killers. (And magic.)

Criminal Minds centers around a team of FBI profilers who use their knowledge of the human mind to get into the heads of the worst criminals—and catch them. The offenders who on other shows would merit a special event or multi-parter—serial killers who taunt the cops, school shooters, child abductors—are just another Monster of the Week.

Beyond that, Criminal Minds is notable for a mostly gender-equal cast, its standards of realism for the motives of its criminals, who are often fascinating characters (though the mechanics of the crimes aren't always that realistic), and for the sympathy and respect with which it treats the victims of violent crime (and sometimes the perpetrators as well!).

In 2011 it got a spinoff, Criminal Minds Suspect Behavior. This did not last.

Has a character page.

Tropes used in Criminal Minds include:

However, if you consider what the episode's unsub did to women he found beautiful...

Retrieved from "https://allthetropes.org/w/index.php?title=Criminal_Minds&oldid=1949643"
Categories:
Cookies help us deliver our services. By using our services, you agree to our use of cookies.