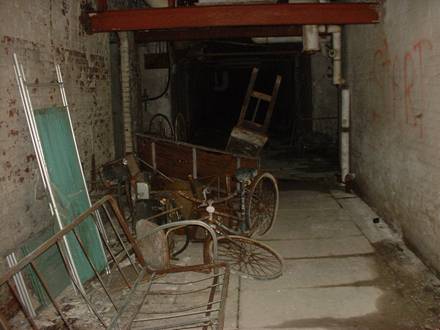 The doctor will see you now...

Even without all these things hospitals are pretty creepy to begin with. Maybe because hospitals are associated with illness and death, as well as being places that should be clean. Or perhaps it's because most people are afraid of hospitals for several reasons: germs; the stale, blaring white atmosphere; doctors poking and prodding you with weird and often painful instruments... not to mention needles...

Many older, real life "abandoned hospitals" in the U.S were properly called sanatoriums, and have probably contributed to the trope imagery. Their abandonment was sometimes related to loss of funding or new prohibitively expensive upgrades required by new government regulations. Often the places were created to treat specific diseases at the time that were eventually locally eradicated (TB clinics in particular) without any later re-purposing of the structures. In popular fiction, sanatoriums also tend to get mixed up with sanitariums, which makes people think of sick and crazed as being one and the same.

See also Abandoned Warehouse and Never Recycle a Building. When a character wakes up in a newly-abandoned hospital, that's an Abandoned Hospital Awakening.

Examples of Abandoned Hospital include:

Retrieved from "https://allthetropes.org/w/index.php?title=Abandoned_Hospital&oldid=1967725"
Categories:
Cookies help us deliver our services. By using our services, you agree to our use of cookies.