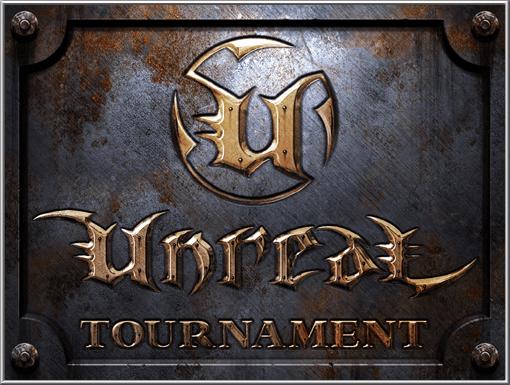 Unreal Tournament is a First-Person Shooter developed by Epic Games and released for PC in 1999. It takes place canonically after Unreal and Unreal II the Awakening, focusing on a tournament (involving both Humans and Aliens) which started as a way to occupy deep-space miners and eventually grew to become a massive sport event watched by countless spectators. It got lots of critical acclaim, and was considered by many reviewers as a superior game to its main rival, Quake III Arena.

The single-player was, at best, an excuse to prepare the player for the multi-player mode, and featured the player choosing a team, a face and a name, and fighting in different arenas with different weapons, different rivals, and in some of these matches with the team he/she has chosen, until he/she reaches the Tournament finals and fight against Xan Kriegor, the Tournament's corrupt champion.

Its success was such that Epic Games decided to entirely focus on the MP side of the franchise for the future.

It spawned two versions for Sega Dreamcast and Playstation2, featuring different maps and characters, in 2001, as well as three sequels: Unreal Tournament 2003, Unreal Tournament 2004 and Unreal Tournament III. There were also four official releases as small and free Expansion Packs, called "Bonus Packs". These were done respectively by Epic Games, Digital Extremes, Cedric "Inoxx" Fiorentino (the creator of the map CTF-Face, a.k.a. "Facing Worlds") and by the three of them for Christmas 2000.[1]

Some characters from this game went big for the remainder of the franchise, as the character sheet shows.

The match has begun!

Tropes related with Malcolm, Brock, Lauren and Xan can be found at the UT Character sheet. This section is for those who didn't appeared in any other game.

Retrieved from "https://allthetropes.org/w/index.php?title=Unreal_Tournament&oldid=1611637"
Categories:
Cookies help us deliver our services. By using our services, you agree to our use of cookies.