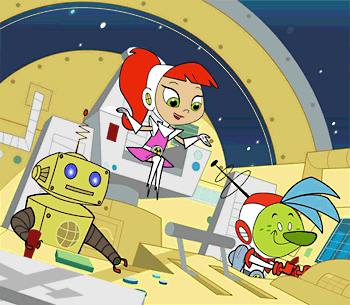 "Call me up, I'm your girl!
Toughest chick in the alien world!
Ain't got time for pink and lace!

A Canadian cartoon about a middle school girl named Betty Barrett who doubles as a Galactic Guardian, fighting evil on the other side of the universe while no one notices her lengthy absence when she finds out she's an alien. The series lasted from September, 2004 to January, 2008. A total of 78 episodes in three seasons.

A sequel with the working title Atomic Betty Redux featuring a slightly older Betty is currently in development.

The show has also reappeared on American airwaves on The Hub (formerly Discovery Kids) before it was taken off of air as of 2011.

Tropes used in Atomic Betty include:

General Bee:Is this a suitable world your highness.

Queen Penelobee No you fool none of these world are
WHIRRRP!!
Queen Penelobee' Wait that smell *beat* Honey!
General Bee But we're in deep space.
Queen PenelobeeI smell honey nonetheless. and it's coming from there