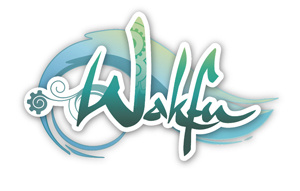 Wakfu is a 2008 French cartoon by Ankama Animation set within the world of an MMORPG of the same name, which is set 1000 years after the production company's other MMO, Dofus. The whole show is completely kid-friendly, since the target audience is 8-10 years old, but tons of jokes are aimed directly at older audiences and fans of the game, is full of Fan Service, and the plot itself matures enormously.

The first season follows a group of adventurers aiding The Hero, Yugo, in his search to find his true family. Together, they battle their way through various dangers, all the while being chased by Nox, a time-manipulating mad-man powered by the energy of all living creatures (the wakfu), which he harvests through swarms of parasitic, robotic bugs.

From a technical point of view, Wakfu is drawn with vectors using the Adobe Flash program, and follows a lot of anime clichés, though the final work is quite unique (and tends to be pretty awesome). It's also notable that the series is animated almost entirely in France, which is rare considering the costs of such a production. Ankama's sister company in Japan is responsible for the animation not done by Ankama proper, the bonus episode "Noximilien" was animated by Madhouse, and a 52-minute feature on Ogrest was made in collaboration with Studio Ghibli.

Wakfu is considered a "cross-media", consisting of the animation, the MMOG, and a trading card game. However, the animation has generated four other Spin-Offs by itself: a series of shorts called Mini-Wakfu, which supplies some useful background information on the two games (Dofus and Wakfu); a browser-based MMORPG, Wakfu: The Guardians, which uses the same engine as Dofus and allows the player to "replay" the episodes of the series through small dungeons, with characters similar in appearance and powers to Yugo; a series of graphic novels titled Wakfu Heroes; and a Beat'Em Up called Island of Wakfu for the Xbox Live Arcade that acts as a Prequel for the series.

The show is produced by France Télévisions and Ankama themselves, with Netflix co-producing the show's third season alongside France Télévisions. The series currently consists of 65-episodes over the course of three seasons. The first season ended on June 5th, 2010, and included a bonus 27th episode (not included in the slated 52) exploring Nox's past. Season two began airing February of 2011, and a 3 part OVA was released in 2014. The third season premiered on France 4 (instead of the usual France 3) on September 2nd, 2017, with the finale airing September 17th, 2017. The Netflix premiere happened on October in France, and was released for the rest of the world on April 6th, 2018.

This series and The Guardians have a Character Sheet.

Not to be confused with Waifu, Wok Fu or Waif Fu.

Tropes used in Wakfu include:

The Legend of Ogrest provides examples of:

Goultard the Barbarian provides examples of:

Wakfu: The Guardians provides examples of:

Retrieved from "https://allthetropes.org/w/index.php?title=Wakfu&oldid=1924503"
Categories:
Cookies help us deliver our services. By using our services, you agree to our use of cookies.