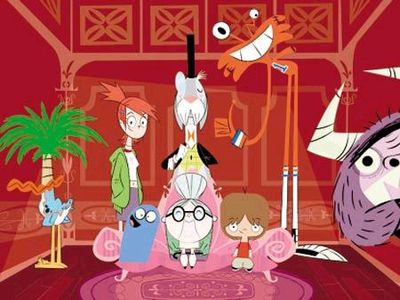 Foster's Home for Imaginary Friends was a animated television series, running from August 2004 to May 2009, for a total of 79 episodes in six seasons. The premise is based on a simple question: In a World where imaginary friends are living, tangible beings, what happens to those friends when the kids grow up?

According to Cartoon Network and Craig McCracken, they go to Foster's, of course! A home for imaginary friends whose kids have outgrown them, Foster's is a place where friends can live together until they are adopted by a child who needs them. The show follows Mac, a shy and creative 8 year old boy, whose imaginary friend Bloo is thrown out of Mac's home and forced to come live at Foster's. Mac doesn't want Bloo to be adopted by another kid, so it's agreed that Bloo will not be put up for adoption, provided that Mac come and play with him every day. Bloo's egotistical, mischievous nature is the complete opposite of Mac's, and together the two cause all manner of chaos throughout the house.

The show averts Not-So-Imaginary Friend in that everyone can see and hear the friends, not just their creators. Since almost all of the characters are imaginary friends dreamed up by children, the show's cast consists of an array of impossible creatures, sometimes bordering on the surreal. There's strong characterization throughout, however, even as the highly comedic plots tend to rely on Bloo causing ever-escalating mayhem. Is known to have loads of Parental Bonuses as well.

Over the course of the series, two Made For TV Movies were released: Good Wilt Hunting in 2006, and Destination Imagination in 2008. Both of them are noticeably Darker and Edgier than the series itself.

Tropes used in Foster's Home for Imaginary Friends include:

Retrieved from "https://allthetropes.org/w/index.php?title=Foster%27s_Home_for_Imaginary_Friends&oldid=1919850"
Categories:
Cookies help us deliver our services. By using our services, you agree to our use of cookies.