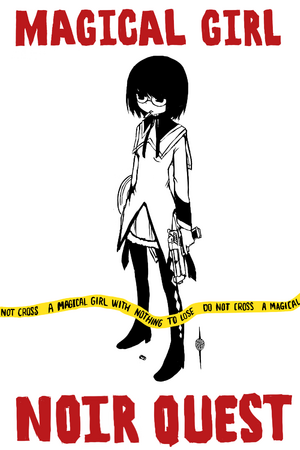 4chan has these things called Quest threads. Quest Threads started on /tg/, but now Quest Threads have their own board. It's (kind of like) a game, where OP[1] is the Game Master and the other people on the thread try to pick what the character does. Either by picking from the options OP provided or coming up with their own. OP is then free to do whatever he likes, but hopefully goes with the answer that has the most support. There aren't inherently any real game mechanics, so it might be somewhat comparable to a Choose Your Own Adventure type of thing.

Magical Girl Noir Quest (here after will be referred to as MGNQ) has an OP that goes by the alias "Deculture" (Occasionally "Protoculture", e.g. thread 85 . Deculture is often referred to as "Decu"). MGNQ is primarily based off Puella Magi Madoka Magica and it's spin offs. It has it's share of Shout Outs and Cross Overs. MGNQ is one of the longest running 4chan Quests. It started in 2012 and has over 300 threads.

In MGNQ, for most threads, the protagonist is Homura (often referred to as Chiaki or Murderface). Some of the posts, particularly those not by Deculture, are NSFW. Deculture's posts are a rather reliable source of entertainment and the posts they are responding give context that make them easier to understand. Other posts are both less reliable and arguably less important (but might be necessary to get some of the jokes that Deculture slips in).

If viewed as a story, then only Deculture's posts and the posts he is responding to really count. This is a rather easy mindset to adopt if you binge the archives as (for the most part) they are the ones of any story consequence and it significantly cuts down on time. If quest threads are viewed more like a game that people participated in, then there is possible merit to the other posts counting too, regardless of if it impacted the story.

If you want to read it here you go. Unfortunately, a lot of the links in replies are kinda dead. If the image thumbnails arn't working in a thread, you can try finding the same thread here [1] assuming it was made on /tg/ and not /qst/ (although this method isn't perfect, e.g. trying this doesn't get you all of thread 206)

Tropes that Deculture made and posts he replied too. Also canon Write Ups

Of course since it's a flashback, we already know the world didn't end. Kinda dampens the bleakness.

Considering what was in Sayaka's hair, it is very possible that Kyoko was thinking about eating marshmallows.

There might be other cases on Rouge Angles of Satin, but if so, they didn't receive nearly as much attention.

Arguably subverted/averted, as Kyoko knows that Walpurgisnacht is dire and wants to do something special while they are all still alive. The sheer peril they are going to be facing is actually why Kyoko cares so much. At what point, if any, are survival and duty less important than enjoying life?

Also a player may consider 'would Decu taking this possibility into account allow for a better story'?

One of them seemed to reference the DEFCON system:

NONE, SCREWING IN LIGHTBULBS IS TOO DANGEROUS AND WE WON'T LET HER DO IT.

Q&A stuff (Word of God, but Decu is free to change his mind, it's not in the canon work proper)

Retrieved from "https://allthetropes.org/w/index.php?title=Magical_Girl_Noir_Quest&oldid=1781885"
Categories:
Cookies help us deliver our services. By using our services, you agree to our use of cookies.