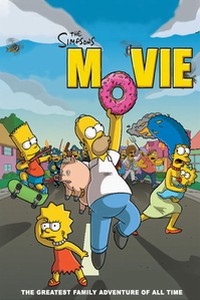 The Simpsons Movie is a 2007 theatrical film adaptation of, well, The Simpsons. The film's production was famously stuck in Development Hell for most of the series' run, with the film having been commissioned around 2001 and movie plans going back as far as the episode "Kamp Krusty" in 1992. The plot of the film centers on Homer essentially being an idiot (what else is new?), but this time it actually comes to bite him in the behind when he becomes responsible for nearly destroying the entire town of Springfield. This being The Simpsons Movie, the entire Simpson family becomes entangled in the plot of the Big Bad (power-hungry EPA agent Russ Cargill, who is hell bent on saving the world from pollution); he first encases the town in a dome, then decides to turn it into a second Grand Canyon with a small nuke.

It currently[when?] holds an 89% at Rotten Tomatoes, and scored enthusiastic praise from critics. The movie also did extremely well at the box office, and a sequel was even hinted at during the end credits.

Tropes used in The Simpsons Movie include:
Retrieved from "https://allthetropes.org/w/index.php?title=The_Simpsons_Movie&oldid=1833882"
Categories:
Cookies help us deliver our services. By using our services, you agree to our use of cookies.