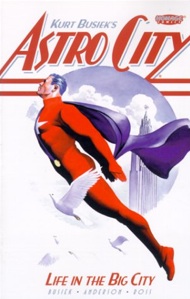 Astro City is a comic book series written by Kurt Busiek, first published in 1995. It has ended its run in 2010. It was originally published by Image, then moved to Homage/Wildstorm, staying with Wildstorm when it was bought by DC.

Astro City is home to a great many Super Heroes. The series does not have one continuing arc or viewpoint character. The stories vary in length, from one to two issues up to a seven issue arc. Each story tends to focus on a different group or character, often taking the viewpoint of minor characters watching events unfold.

Astro City is treated in a more or less "realistic" fashion, though the creator gently rejects the term "realistic", often focusing on the emotional and personal lives of the heroes, or of those who just happen to live in the same universe as superheroes and villains. This puts it in the same class as Watchmen, The Golden Age, Kingdom Come, and Busiek's own Marvels.

The Backstory of Astro City goes back to at least the 19th century, with the first public hero, Air Ace appearing during WWI "The Old Soldier" (thought dead in 1863) and "Ironhorse, the Human Locomotive" (first seen since 1862).

The list of superheroes and villains (individuals and groups) mentioned is extremely extensive.

More detail can be found at the Other Wiki's article.

Tropes used in Astro City include:
Retrieved from "https://allthetropes.org/w/index.php?title=Astro_City&oldid=1912248"
Categories:
Cookies help us deliver our services. By using our services, you agree to our use of cookies.