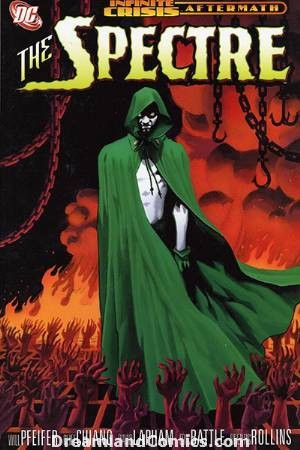 If you're a murderer, and you meet this guy, you're screwed.

The Spectre is a DC Comics character. Basically, he's a superhero ghost, though in practice he has been everything from a supernatural serial killer (of criminals) to the Agent of God's Wrath over the years.

The character first appeared in "More Fun Comics" #52 (February, 1940), created by Jerry Siegel and Bernard Baily. In his origin story, the Spectre was Jim Corrigan, a police detective who was murdered by criminals. In the afterlife, he decried the injustice of his murder, and an unseen voice (later interpreted as being God's) granted his wish: he returned to life, but with supernatural powers that he soon used to kill his murderers.

At this point, other than in his physical appearance, Spectre was your typical supernatural avenger character. However at the time, superheroes were getting in vogue, so he was soon added to the roster of the Justice Society of America, and treated pretty much as any other superhero; he even acted and talked as casually as the others. He also found himself easily defeated despite his nonliving nature and his incredible powers, just so the other members of the group could have a chance to save the day. As for Corrigan, he just went on with his life, as if nothing had happened (his murder never having been discovered.)

The relationship between Corrigan and The Spectre varied over the years; at one point, they were actually separate characters, with The Spectre merely using Corrigan's body to "rest" when he needed to, much to the latter's chagrin.

The Spectre held his own series in "More Fun Comics" until issue #101 (January, February, 1945). He was regularly featured with the Justice Society in "All-Star Comics" #3-23 (Winter, 1940 - Winter, 1944). The character was then dropped for the following twenty years. He was revived in "Showcase" #60-61 (January-April, 1966). He also appeared in #64 (September-October, 1966), before gaining his own magazine. "Spectre" vol. 1 lasted for 10 issues, from December, 1967 to June, 1969. In the 1970s, the Spectre was revamped, now being taken back to his original horror roots: he would track down murderers and then execute them in some pretty twisted ways (for example, turning a hood to wood and then cutting him with a buzzsaw.)

The Spectre also found himself becoming more and more powerful: in his fight against Shatan (a poorly disguised Satan stand-in) they hit each other with planets. Spectre was eventually acknowledged as one of the mightiest beings in the DC Universe, even more so than the Silver Age Superman. About the only beings stronger were The Phantom Stranger and God himself. This limited him to making appearances only when the universe was threatened by supernatural menaces, and usually only long enough to fix some problem and then leave.

Post-Crisis, The Spectre was reinvented as the actual embodiment of God's Wrath. He had his own series again, which explored the reasons for his existence. Ultimately it was revealed that the Spectre was actually a fallen angel pardoned by God by being turned into his personal avenger and not just part of Corrigan's soul. Corrigan in fact was tired of living and willingly separated from The Spectre and went on to Heaven.

This left the Spectre without a host, which made it reckless; eventually he bonded with the then-dead Hal Jordan, who tried to twist the Spectre's mission from vengeance to redemption. This was later undone by Jordan's resurrection. Again left without a host, the Spectre was tricked by Eclipso (who ironically was once God's Avenger as well) into killing most of the magic-users in the DC Universe since she convinced him that "magic goes against God's will". (This turned out to be part of a larger Xanatos Roulette to recreate the DC Multiverse, as seen in Infinite Crisis.) He was stopped only by being bonded (by God) to Crispus Allen, another recently-murdered cop. (DC teased the audience by having his killer also be named Jim Corrigan.) He's still the current Spectre, who is trying to understand his role.

The Spectre recently received a twelve-minute animated short as a bonus on the Justice League: Crisis on Two Earths DVD.

Tropes used in The Spectre include:
Retrieved from "https://allthetropes.org/w/index.php?title=The_Spectre&oldid=1774245"
Categories:
Cookies help us deliver our services. By using our services, you agree to our use of cookies.