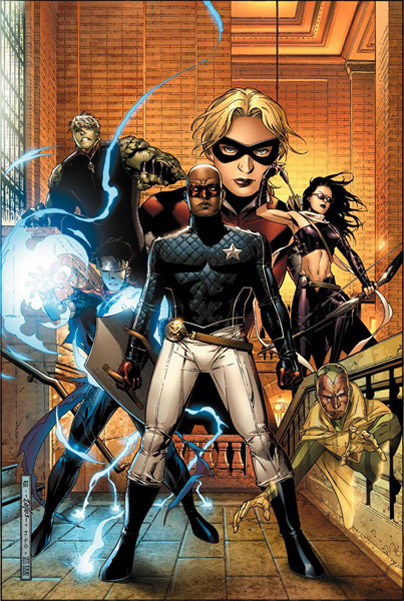 The comic has so far had a 12-issue run, an annual issue, a Civil War tie-in where they teamed up with the Runaways (and another for the Secret Invasion), and a series of special Young Avengers Presents... books which focused on each character individually. A limited series by the original writer and artist, entitled Avengers: The Children's Crusade, ended with Cassie and the Vision dead, Patriot retiring from superheroics, and the other kids becoming full-fledged Avengers. Oh yeah, and Scott Lang and the Scarlet Witch are back.

Generally, reception has been positive, especially from GLBT readers, for the honest presentation of a relatively realistic gay couple who (so far) haven't had it any worse than any other superhero in the biz.

Tropes used in Young Avengers include:
Retrieved from "https://allthetropes.org/w/index.php?title=Young_Avengers&oldid=1274596"
Categories:
Cookies help us deliver our services. By using our services, you agree to our use of cookies.