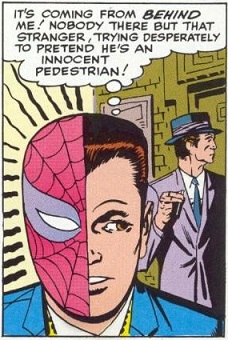 A character has the psychic ability to know when something is about to happen, and react accordingly to prevent some kind of harm. Named after Spider-Man's iconic super-power.

To prevent it from becoming a Story-Breaker Power, the sense usually comes with a few limitations. Typically, it will detect danger and allow the character to measure severity by intensity, but cannot indicate the danger's exact nature or origin.

This power is similar and often a part of Combat Clairvoyance, but it does not really help evading specific attacks on purpose. When the character knows that something has just happened—as opposed to knowing that something is going to happen, it's an example of My Significance Sense Is Tingling. If it's limited to surveillance, it's awareness of Being Watched. Also expect extreme mockery from the viewer if the power fails on a regular basis.

In comics, this is often denoted as squiggly lines around the character's head. See the Trope Namer and Professor Xavier of the X-Men for two prominent examples. Compare The Force Is Strong with This One, which is when a character can sense another's Power Level.

Compare and contrast with Super Reflexes, the non-psychic version of this power.

Examples of Spider Sense include:

Retrieved from "https://allthetropes.org/w/index.php?title=Spider_Sense&oldid=1951727"
Categories:
Cookies help us deliver our services. By using our services, you agree to our use of cookies.