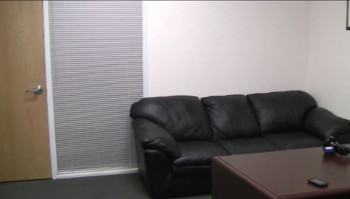 "I don't suppose I'm the only one who's had to fuck her way to the top."

—Jerilee Randall, accepting "the Award" (no, not the Oscar) in The Lonely Lady

The time-dishonored method for young aspiring actresses (and actors, too) to advance their careers: by sleeping with the producer. Although the term itself stems from the entertainment industry, the concept itself is universal and spans numerous business paths.

Likely no longer safe to use as a plot device in mainstream productions in the wake of events such as the #MeToo movement, the Harvey Weinstein trials and the widespread exposure of real-world sexual harassment in the entertainment industry – which has become every liability lawyer's nightmare.

To avoid controversy, Real Life examples should not be discussed. Examples should stick to this trope as treated in fictional shows about show business.

See also Sexual Extortion and You Would Make a Great Model.

Examples of Casting Couch include:

High Elf: How did you get this job, anyway? Did you march into battle in a dress?
Other High Elf: Wield a warrior handbag?
Wolf: I slept my way to this position.
(He smirks, they both sulk)