Yet Another Fantasy Gamer Comic 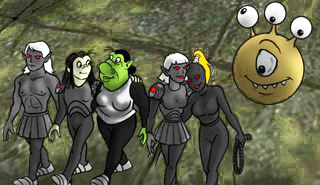 Yet Another Fantasy Gamer Comic is a daily fantasy comic following the lives and (mis)adventures of the D&D monsters of the Black Mountain, and their interactions with the rest of the world. As the comic went on, more and more characters got added to the cast, and now plenty of "good" humans and other characters living outside of Black Mountain get their own arcs as well.

Notable for its sense of humour, sketch-like yet very nice artwork, and complex character development and interaction.

A word of warning for those who browse Tropes wikis at work (you slackers) -- it has some NSFW elements, mostly casual nudity.

Has a character sheet, which is in need of much love.

Tropes used in Yet Another Fantasy Gamer Comic include:
Retrieved from "https://allthetropes.org/w/index.php?title=Yet_Another_Fantasy_Gamer_Comic&oldid=1838435"
Categories:
Cookies help us deliver our services. By using our services, you agree to our use of cookies.