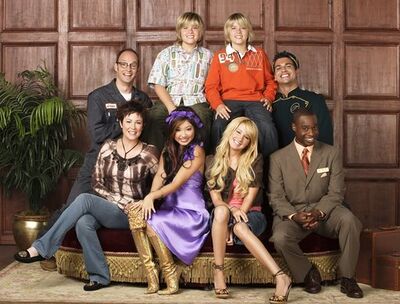 The Suite Life of Zack and Cody (2005-2008) is a Disney Channel Kid Com about a couple of twins named Zack and Cody who live in The Tipton, a hotel in Boston. Their divorced mom is a singer at the hotel who has a secret admirer in a rather dorky janitor named Arwin. Also at the hotel are two teenage girls, London, the moronic heiress to the hotel chain, and Maddie, a candy-counter girl who struggles to make sure she completes school as well as juggling very degrading jobs. The hotel is run by Mr. Moseby, who rarely tolerates the twins' antics. It was chronologically the second series in the DCLAU.

After that the show ended in 2008, it continued with a Spin-Off called The Suite Life on Deck, putting two-thirds of the cast on a luxury liner. Meanwhile, reruns of the original show have popped up on Disney XD. A Suite Life movie has aired, set in Season 3 of On Deck, focusing on the twins entering a "Gemini Project", a study on the interaction of twins.

After 3 seasons, On Deck ended in 2011 with the twins celebrating their graduation. If the original series and the Retool are counted as a single series, it's had the longest original run of any series on the Disney Channel, at six seasons and 162 episodes total.

Now has its own Getting Crap Past The Radar page.

Tropes used in The Suite Life of Zack and Cody include:

Tropes in The Suite Life on Deck

Tropes in The Suite Life Movie

Retrieved from "https://allthetropes.org/w/index.php?title=The_Suite_Life_of_Zack_and_Cody&oldid=1968505"
Categories:
Cookies help us deliver our services. By using our services, you agree to our use of cookies.