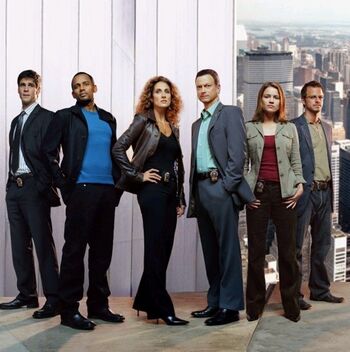 Spin-Off from CSI: Miami itself spun from CSI (2004- present) set in New York City. The show's character work is probably its strongest aspect, with multi-season arcs for several of the characters, particularly Mac, Danny, and Lindsay. The cast is full of slightly messed up characters, all the way from Mac down to Adam. In fact, the coroner is probably the most well-adjusted person in the lab. In general this is handled well and doesn't devolve into Wangst territory.

Tropes used in CSI: NY include:
Retrieved from "https://allthetropes.org/w/index.php?title=CSI:_NY&oldid=1831787"
Categories:
Cookies help us deliver our services. By using our services, you agree to our use of cookies.