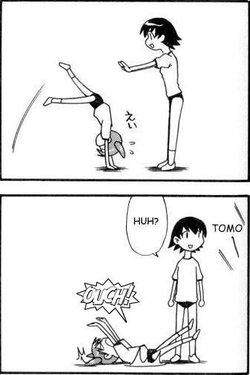 In media, the symptoms of attention deficit disorders tend to be exaggerated to the point of absurdity. Sufferers seem to be on a constant caffeine high. They are unable to maintain focus on anything for more than a few minutes before getting distracted by a shiny object, hence the trope title.

Very few real-life sufferers have it that bad, but it's much funnier than a character who's just fidgety and occasionally spaces out.

See also Hollywood Psych, The Schizophrenia Conspiracy, and L Is for Dyslexia. Contrast Cloudcuckoolander, who doesn't have a disorder (or at least isn't required to), but acts similarly. This exaggeration is frequently seen in Genki Girls and Keets.

Closely related is What Does This Button Do?, which you can expect to hear often from such individuals. Hilarity may or may not ensue.

This trope is not to be confused with-- oh, wow! Look at all the examples!

No real life examples, please; this page is about the representations made in media, and only about the repr-
Ooh, another trope!

Retrieved from "https://allthetropes.org/w/index.php?title=Attention_Deficit_Ooh_Shiny&oldid=1924742"
Categories:
Cookies help us deliver our services. By using our services, you agree to our use of cookies.