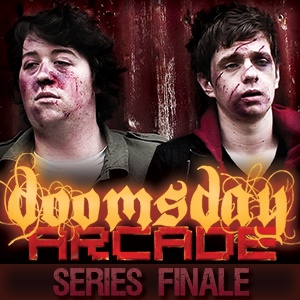 Doomsday Arcade is a comedy web series shown on The Escapist. The show tells the harrowing tale of two average civilians named Michael Lunds and Michael Shanks who are trapped in the middle of a shocking doomsday scenario: Video game characters NPCs have found a way into the real world and are out to win their freedom from the oppressive Users users. On the way, they not only exact their Genre Savvy-ness on various game characters, new and old, but also discover that there might be a deeper reason behind the invasion which revolves around them.

Let's be honest, though, you're really in it for the puns and references. Especially the numerous lampshade hangings of not only these puns, but also various game cliches in general. In short, this is one to watch...

Tropes used in Doomsday Arcade include:

"Look at this report! It makes no sense! No periods, no commas, no punctuation! Take it back!" This is fuelled further by the likelihood of the man with the report being Yahtzee.