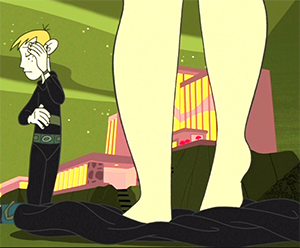 It becomes necessary (or desirable) for a female character to take her clothes off in a non-cable show.

We cut to a shot of her slipping her dress off her shoulders—then we cut down behind her feet and see the dress tumble to the floor around her legs.

See also Sexy Discretion Shot. Often overlaps with Toplessness From the Back, Sexy Coat Flashing. If the woman in question is barefoot, this can lead to a minor bit of Foot Focus.

Examples of Dress Hits Floor include:

Hardison: ...Why am I looking away?

"What an interesting woman."