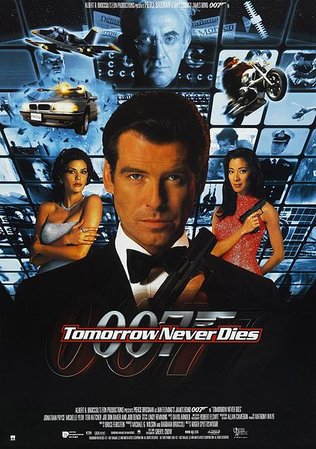 The 18th James Bond film, starring Pierce Brosnan. After a British ship is sunk off the shore of China, James Bond is sent to investigate media mogul Elliot Carver (Jonathan Pryce) who is believed to be tied to it. Bond uncovers Carver's scheme to turn Britain and China against each other in World War III for his broadcasting and newspaper benefit, and gets a new partner in the person of Chinese agent Wai Lin (Michelle Yeoh).

After the more serious tone of GoldenEye, Tomorrow Never Dies eases back into the Connery-esque "classic Bond" formula beat-for-beat, with one-liners galore, a Large Ham villain, and plenty of action setpieces that make full use of the Theme Music Power-Up trope. It was moderately well-received by the fanbase and critics, and further cemented Brosnan into the role, who began to carve his niche as the suave Bond.

Tropes used in Tomorrow Never Dies include:
Retrieved from "https://allthetropes.org/w/index.php?title=Tomorrow_Never_Dies&oldid=1759804"
Categories:
Cookies help us deliver our services. By using our services, you agree to our use of cookies.