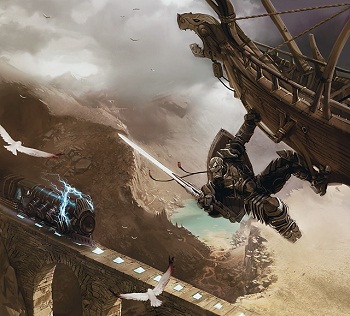 Jumping from a helicopter to a train... Dungeon Punk-style. Note the Magitek mechanical man.

The Magical Database is actually magical, and the Badass Longcoat packs a wand of fireballs instead of a gun. The local organized crime syndicate is built on a thriving Black Market in illegal Eye of Newt, and keeps its boys in line with a cadre of demonic enforcers. Mordor is a slum. The trial of the century: Commonwealth vs. Golem Liberation Movement.

Welcome to Dungeon Punk, a Punk Punk genre which tries to apply the gritty, cynical tone of Cyberpunk and Steampunk to a Heroic Fantasy setting.

Usually, this takes the maxim "Any sufficiently advanced technology is indistinguishable from magic." and turns it on its head. As we get more proficient with the use of magic, it takes on characteristics of technology. We have railroads, but instead of burning coal to work a steam engine, they have a bound air elemental. We have radios, but instead of sending electromagnetic waves across space, they work by sympathetic magic.

Note, however, that not all Magitek falls under this trope; it requires a slide toward the cynical end of the Sliding Scale of Idealism Versus Cynicism as well.

This always involves Functional Magic of one kind or another. Depending on the dark tone of the piece, one may find things are often Powered by a Forsaken Child.

Compare with the mystic Masquerades, where everything appears "normal" until you dig a little deeper...

Not to be confused with a 70's rocker who's into bondage.

Examples of Dungeon Punk include: