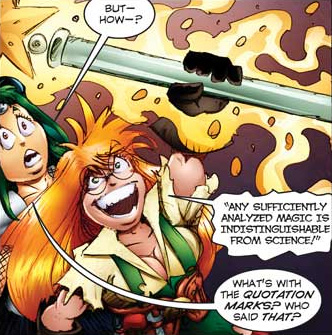 In his tower, the wizard Istar casts his fortieth fireball today while his apprentice diligently notes the exact qualities of each. On his workbench are piles of fireball spells yet untested, but Istar plans to catalogue them all. Only then can he begin to study what makes one fireball stronger than another.

While gathering herbs, Granny Annick thinks to herself: everyone says horseshoes are lucky, but how lucky are they? Now if I got ten people from the village to roll dice a few times, and gave them a coin for every number facing once with and once without a horseshoe, I'd only have to count the coins.

For a verse where Magic A Is Magic A, this is an inherently Justified Trope just as long as it makes sense for the culture: Empirical evidence and experimentation are the cornerstone of The Scientific Method, and there is no reason that it should be any less effective at discovering the details of a self-consistent series of rules just because it's called "magic" rather than "physics".

One of the many sides arguing over Un-Equal Rites. Contrast with Magic Versus Science where this attitude belongs only to the scientists, and Flat Earth Atheist, where fans of "science" will loudly deny magic exists rather than accept empirical evidence. Not quite related to Magitek or Post-Modern Magik but may show up alongside either or cause them. Compare to Doing In the Wizard, Doing In the Scientist, and Sufficiently Advanced Aliens.

A subtrope of Fantastic Science. Compare and contrast The Spark of Genius. For the sake of general cohesion, anything that more or less works thanks to magic but isn't actually called "magic" by anyone in the work falls under this trope.

Examples of Sufficiently Analyzed Magic include:

It's all very well a potion calling for Love-in-idleness, but which of the thirty-seven common plants called by that name in various parts of the continent was actually meant?
The reason that Granny Weatherwax was a better witch than Magrat was that she knew that in witchcraft it didn't matter a damn which one it was, or even if it was a piece of grass.
The reason that Magrat was a better doctor than Granny was that she thought it did.

Zeetha, playing the Fairy Godmother: What's with the quotation marks? Who said that?
Agatha as Cinderella: ME!