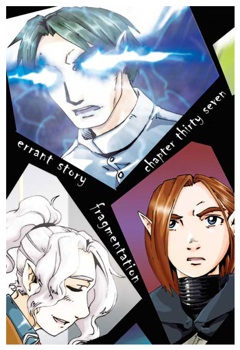 You might want to stand back, bad things tend to happen around these three.

Errant Story was a High Fantasy Web Comic that ran from 2002 to 2012, and the second webcomic of Michael Poe (Exploitation Now being his first, Does Not Play Well With Others his third). With a light touch of Post Modernism, Errant Story has a sizable amount of self-referential humor, Genre Savvy characters, and quite a few lampshaded, subverted, invoked, and roundly mocked tropes. It starts out following the adventures of a half-elven mage seeking ultimate arcane power, though as other main characters join up it quickly becomes evident that there is much more going on behind the scenes. The comic underwent slow onset Cerebus Syndrome, but still retained many of its humorous elements well into the series.

Character-specific tropes can be found on the character sheet. The comic also has a wiki.

Tropes used in Errant Story include:

Babies Ever After: Sarine and Jon have a daughter, Mari.

Retrieved from "https://allthetropes.org/w/index.php?title=Errant_Story&oldid=1946527"
Categories:
Cookies help us deliver our services. By using our services, you agree to our use of cookies.