The Vision of Escaflowne

Everything About Fiction You Never Wanted to Know.
(Redirected from Vision of Escaflowne)
Jump to navigation Jump to search 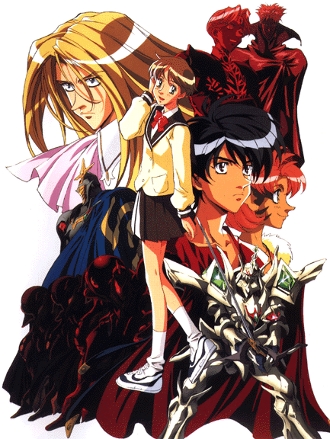 Hitomi Kanzaki is an Ordinary High School Student who reads tarot cards and runs on her school's track team. One day, just as she's about to earn her Sacred First Kiss from her senpai and crush, a dragon appears in a Pillar of Light, closely pursued by a young armored warrior. The warrior, Prince Van, rescues Hitomi and her friends from the dragon, and takes a power source for his Humongous Mecha from the heart of the dead dragon. Another Pillar of Light then appears, whisking Hitomi and Van away to his world, Gaea, where Earth itself hangs in the night sky...

Once there, Hitomi and Van quickly become embroiled in a massive war. Van's kingdom of Fanelia is one of many at war with the sinister Zaibach Empire, whose Emperor Dornkirk seeks to use his probability-altering technology (and army of Schizo-Tech Humongous Mecha known as "Guymelefs" --or "Melefs" for short) to conquer Gaea and create a world without uncertainty. The best chance to turn the tide of the war is the mighty Guymelef, the titular Escaflowne... which is also the biggest source of uncertainty in Dornkirk's vision of the future.

Developed after a trip to Nepal by Shoji Kawamori, Tenkuu no Escaflowne was broadcast in Japan from April 2, 1996 to September 24, 1999 and is commonly known as The Vision of Escaflowne in the US.

Now with its own character sheet.

Tropes used in The Vision of Escaflowne include:

Of course, poor Van has to take every level in Badass he can if he wants to stop The Empire and save the world...

Retrieved from "https://allthetropes.org/w/index.php?title=The_Vision_of_Escaflowne&oldid=1962794"
Categories:
Cookies help us deliver our services. By using our services, you agree to our use of cookies.