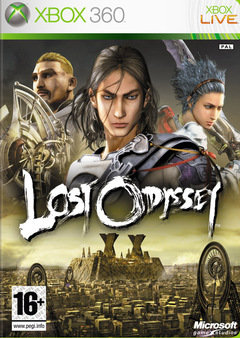 Lost Odyssey was the second of two Japanese-style RPGs developed for the Xbox 360 by Mistwalker, the other being Blue Dragon. The game was produced by Final Fantasy creator Hironobu Sakaguchi, scored by Nobuo Uematsu, written by award-winning novelist Kiyoshi Shigematsu, with character designs by Takehiko Inoue, the manga artist who single-handedly popularized basketball in Japan with the Slam Dunk series.

Now that your expectations are appropriately high, let's move on.

Lost Odyssey is a very Japanese RPG, centered around Kaim Argonar, The Hero, an amnesiac mercenary who is apparently immortal. As the game opens, he is serving in the army of the Magic Republic of Uhra, a nation still in turmoil from the abolition of its monarchy, in their war against the beastmen of Khent. The game opens with the final battle of the war, which is concluded by a meteor strike (which takes the form of lava pouring out of the sky) that wipes out nearly everyone on both sides save Kaim and another amnesiac immortal, a woman named Seth Balmore.

From the moment he meets Seth on, Kaim's memories start coming back. At the same time, Uhra is convinced that the meteor was the result of some finicky wiring in their new Magitek tower, and send Kaim off to investigate. The plot thickens as Councilor Gongora schemes to restore the inept Prince Tolten to the Uhran throne and restore the monarchy. All of this is set against the background of the "Magic-Industrial Revolution," as the nations of the world are struggling to incorporate Magitek into their daily lives. Prominent characters include:

The gameplay is classic turn-based combat based around a skill system. Mortal characters, which form most of the party, learn new skills by gaining levels, and can temporarily gain new skills by equipping items, while immortal characters can learn skills from the items they equip and by "skill-linking" with the mortal characters. Magic is divided into four categories - Black offensive magic and White defensive magic, which are obvious holdovers from Final Fantasy, as well as buffing-focused Spirit magic and Composite magic, which is a fusion of spells from other schools. General gameplay resembles NES- and SNES-era entries in the Final Fantasy series, but with the benefit of the Xbox 360's graphical power and much more elaborate Boss Battles.

Another gameplay feature of note is the "Thousand Years of Dreams" - as the game goes on, Kaim starts to recover his memory in the form of dreams. These dreams are displayed in the game as short stories. Read these at your peril. Tears will be jerked. The game can be played with dialog in both the original Japanese and in English, to satisfy both sides of the Subbing Versus Dubbing debate, and both are very high quality performances. The game was not much of a fan favorite in Japan due to the 360's unpopularity there, but enjoyed much greater success in the West. The opposite occurs with critics reception, scoring a 36/40 from Famitsu but mixed reaction from Western review sites.

Tropes used in Lost Odyssey include:
Retrieved from "https://allthetropes.org/w/index.php?title=Lost_Odyssey&oldid=1506847"
Categories:
Cookies help us deliver our services. By using our services, you agree to our use of cookies.