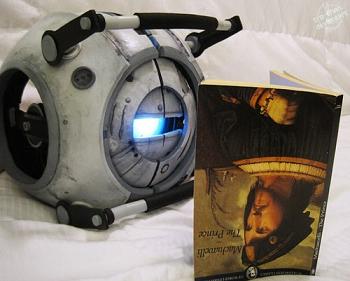 "Oh, pardon me. I was just, y'know, reading up on some Machiavelli. Which I do all the time, of course. Because that's what smart robots do."

The opposite of Obfuscating Stupidity: A stupid character pretends (or tries to pretend) he or she is really smart or otherwise good at something. When done with pure romance in mind, the result is Playing Cyrano. The stupid characters will either enlist a smart character to feed them lines, or bluff their way through with seemingly profound statements ("What is art? Are we Art? Is Art Art?") and Techno Babble.

Tend to show up in characters that are so dumb (Genre Blind), they don't even realize that Dumb Is Good. Frequently involves the use of Nerd Glasses. As with Obfuscating Stupidity, Hilarity Ensues frequently from a stupid confusion or Double Entendre conversation. This often results in Delusions of Eloquence. See also Know-Nothing Know-It-All.

Note: It is possible to feign greater intelligence than you actually have, if you are at least smarter than the people you are trying to convince.

Compare with Small Name, Big Ego. On meta-level this often is passed as Parody Retcon or True Art Is Incomprehensible.

Examples of Feigning Intelligence include:

Otto: Don't call me stupid.
Wanda: Oh, right! To call you stupid would be an insult to stupid people! I've known sheep that could outwit you. I've worn dresses with higher IQs. But you think you're an intellectual, don't you, ape?
Otto: Apes don't read philosophy.
Wanda: Yes they do, Otto. They just don't understand it. Now let me correct you on a couple of things, OK? Aristotle was not Belgian. The central message of Buddhism is not "Every man for himself." And the London Underground is not a political movement. Those are all mistakes, Otto! I looked them up!"

Grady: You mean they're acting so smart because they're so stupid?

he believed it was blamed foolishness to stay, and that doctor hanging over them. But the king says:
"Cuss the doctor! What do we k'yer for him? Hain't we got all the fools in town on our side? And ain't that a big enough majority in any town?"

Ted's son: Mother, I abhor you!
Ted: Now son, I'll have none of that language in this house!

Simmons: If you want me to multiply two big numbers in my head, that I can do.
Grif: What's thirty-two times fifty-six?
Simmons: Thirty-one thousand, four-hundred fifty-two.
Sarge (towards Simmons): Is that right?
Simmons: Yes.

their main skill is capacity to pass exams written by people like them.

With just a little hard work, you can actually train your cats to do whatever they feel like doing. [1]

After finishing the paper, Boghossian and Lindsay said they both read it "to ensure it didn't say anything meaningful".