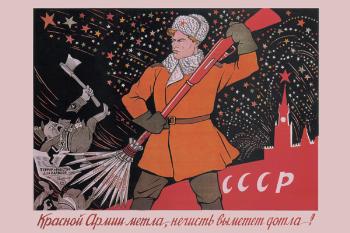 Literal translation: Red Army is a broom to sweep the homeland clean of (presumably capitalist) scum ...which may or may not also be the reason why they ran out of bayonets halfway through the war.

Remember the CCCP? What about the USSR? No? Hmmm. How about Rocky IV? Yeah, well that's all over now.

The USSR (Union of Soviet Socialist Republics), America's sworn enemies during the Cold War, has gone through several periods of stereotyping. The most famous is the Communist Russia of the Cold War. Everyone's red, calls each other "comrade", and is trying to take away the freedom of the world in the name of Communism. Of course, with the fall of Communism in the country, this one is pretty dead. Then again, Putin made his name in the KGB.

Then there are tall fluffy hats, the Cossack Dance, borscht borshch, vodka (lots of vodka), and everyone constantly being miserable and cold, which is why they drink the vodka. These tropes seem permanently associated with the area. In recent years, the Russian bride has started to turn up a lot. Chernobyl has also become very important in the outside world's views of the country, even though it is in Ukraine. This building will probably show up, too. No, it's not the Kremlin.

For obvious reasons, the Sovetskiy Soyuz (and later Rossiyskaya Federatsiya) have been subject to a lot of California Doubling over the years, although there are a number of late eighties films (such as The Russia House) actually filmed in Moscow, because of glasnost.

This article will list some of the more common ways for foreigners to get all things Russian wrong. In Russia proper, they are called razvesistaya klukva (blooming cranberry) and are a source of much humor.

See The Great Politics Mess-Up, Dirty Communists, and Lzherusskie. Russia explains Russia and its predecessors in some depth.

Also see History of the USSR for the Useful Notes on this.

Examples of Glorious Mother Russia include: