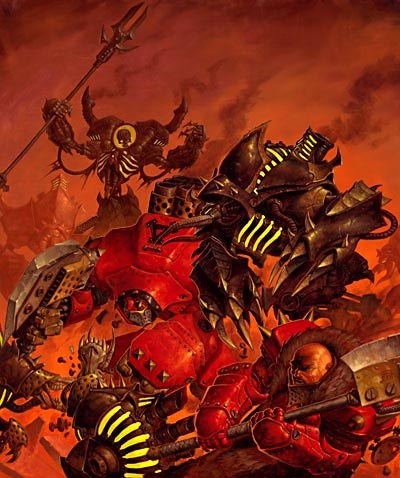 Iron Kingdoms is a fantasy setting created by the gaming company Privateer Press. Originally designed as a campaign setting for the 3rd edition of Dungeons and Dragons, it is now known chiefly as the setting for the two miniatures-based tabletop strategy games WARMACHINE and HORDES.

The term "Iron Kingdoms" specifically refers to a collection of human nations in the western portion of the continent of Immoren on a planet known as Caen. In the past, Western Immoren used to be a fairly typical fantasy setting, where warriors used swords and bows, wizards cast spells, and parties of human, dwarven, and (occasionally) elven adventurers would wander the land, beating up goblins, ogres (called ogrun in Immoren), trolls, and other monsters in order to take their stuff. All that changed when the Orgoth invaded from across the western ocean. A race of humans whose immensely powerful sorcery put Immoren magic to shame, the Orgoth easily conquered the squabbling human city-states of Immoren and ruled the land as unbeatable overlords for the better part of four hundred years. No longer able to rely on standard swords and sorcery, Immoren freedom fighters were forced to develop new technologies in order to counter the Orgoth's immense magical advantage—technologies such as steam engines, gunpowder, and magic steam-powered robots that make use of both. The rebellion also forced the humans of Immoren to put aside their old racial grudges, and goblins, ogrun, and trollkin (the most intelligent and civilized of the trolls) stood side-by-side with humans against the Orgoth invaders. After another two hundred years of fighting, the inhabitants of Immoren finally managed to drive the Orgoth from their shores. In order to prevent their lands descending into chaos once more, the human rulers of Immoren met in the city of Corvis and drew up a series of treaties that officially divided their lands into the titular Iron Kingdoms:

In addition to these five human kingdoms, there are a number of other power blocs on the continent:

Of course, for all this political and technological mucking about, the Iron Kingdoms are still by-and-large a heroic fantasy setting. It's just that the warriors now also use guns, the wizards now also use machines, and the goblins, ogrun, and trolls are now just as likely to be adventurers (or hapless townsfolk) as adventurer-bait.

A Warmachine video game is in the works, with gameplay footage unveiled at Gen Con 2010, with an actual trailer shown at E3 2011 (which can be found here). The Gameplay Footage from 2010 can be found here (though if anyone can find a better-quality version of the footage, it would be greatly appreciated).

Trope like you've got a pair!
Retrieved from "https://allthetropes.org/w/index.php?title=Iron_Kingdoms&oldid=1758793"
Categories: